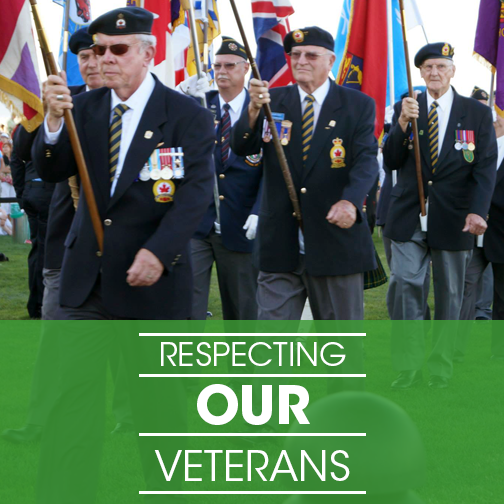 (OTTAWA) August 14, 2015 – Elizabeth May​, Leader of the Green Party of Canada and MP (Saanich – Gulf Islands), today unveiled the Green Party’s plan to reverse damaging cuts to services and support for our veterans. She made the announcement in Nanaimo, and was joined by Afghanistan war veteran Capt. Trevor Greene and his family.

“Under Stephen Harper, our veterans have experienced a loss of respect and of needed services,” said Ms. May. “The use of lump sum payments have left disabled veterans without income security for their lifetimes. The shuttering of Veterans Affairs offices has left veterans without needed services. We have sent our military into war zones without planning for the needed services for them and their families on their return. The failure to respond adequately has led to tragic losses at home to suicide.”

Working as a strong partner in what is projected to be a minority Parliament after the next election, the Green Party’s plan calls for reversing damaging changes brought in under the New Veteran’s Charter. The Green Party will increase funding to ensure any veteran with Post­-Traumatic Stress Disorder (PTSD) who wants a service dog will have access to one. Service dogs reduce PTSD in 82% of the cases, comparing favourably to pharmaceutical approaches. The Green Party commits to re­opening the Veterans Affairs offices.

Capt. Trevor Greene, a Canadian Forces veteran, author and journalist, who survived a brutal axe attack while serving in Afghanistan in 2006, endorsed the Green approach. Mr. Greene has co­authored, with sustainability expert Mike Velemirovich, a book focused on the threat of climate change – There Is No Planet B; Promise and Peril On Our Warming World.

For additional information or to arrange and interview, please contact: