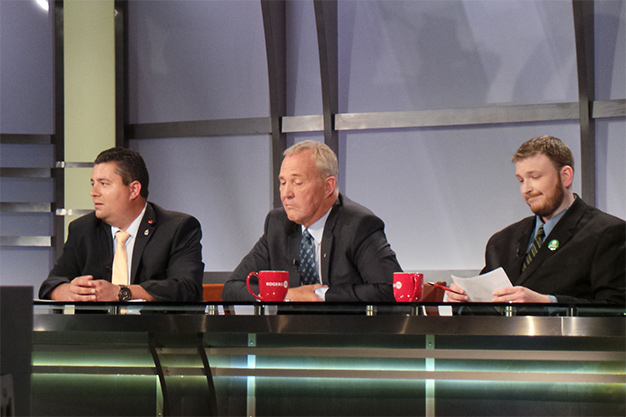 On Friday night, Rogers TV aired the first debate of the candidates in Scarborough Southwest.  The debate saw NDP incumbent Dan Harris, Liberal candidate Bill Blair, and the Green Party’s Tommy Taylor discuss the issues that matter to our residents.

The media was quick to respond with its verdict on the debate…Bill Blair came out the loser, with Tommy and Dan holding him to task about several issues, including the controversial practice of “carding”.

Don’t forget to come out to the Scarborough Southwest live debate, this Wednesday night, Oct. 7th at St. Paul’s United Church.  The Scarborough Mirror has reported that it’s unclear whether Blair will attend, and Conservative candidate Roshan Nallaratnam has declined the all-candidate’s meeting, as he also declined to be present for the Roger’s debate.

Come on out to show your support for Tommy and the Green Party of Canada, and to see the action in one of the most watched ridings in Canada!